View Original Article Here
TALLAHASSEE — The Senate Wednesday passed a bill that would allow All Aboard Florida to serve alcohol at its train stations.
SB 698 changes different alcohol and tobacco regulations and would allow wine, beer and alcohol to be sold at rail stations, including restaurants, "entertainment, or recreational facilities" within the premises.
The Senate passed the bill with a 38-0 vote. Senate President-elect Joe Negron, R-Stuart, said he voted for the bill by mistake and asked the Senate clerk to change his vote, but that wasn't reflected in the bill's vote tally Wednesday evening. The bill now heads to the House.
Negron opposes All Aboard's Brightline trains as do many of his constituents in all three Treasure Coast counties and northern Palm Beach. They are concerned about road closures and impacts on their lifestyle. He's vowed to oppose the rail project as well in the Legislature.
Sen. Thad Altman, a Rockledge Republican who represents Indian River County, voted for SB 698.
Florida currently allows beer, wine and liquor to be sold to rail passengers for consumption on the cars, and liquor may only be sold in miniature bottles of no more than 2 ounces.
The bill would expand that to the stations and liquor would not have to be sold in miniature bottles. The license issued by the Department of Business and Professional Regulation would not be subject to the restrictions, limiting the number of such licenses that may be issued per county. The bill also prohibits local governments from requiring additional licenses or levying an extra tax.
Posted by Liquor License Locators FL at 10:15 AM No comments:

The Miami Herald did a piece on Patrick “Chip” Cassidy who has became the go-to-guy in South Florida for his expertise in wine. Although originally from New York, Cassidy decided to learn the wine business from the ground up after tasting a bottle of Château Lafite 1959, which these days costs as much as $62,000.

Cassidy's first job was delivering wine for a Long Island, N.Y. Store almost 40 years ago. At the age of 59, he still continues to have the same passion and desire for wine and has personally sampled more than, at last count, 4,000 wines and liquors. Cassidy, a former decorated Vietnam medic, offers advice to young students at FIU on the subject of business and wine.

There are several valuable lessons to learn from Cassidy's entrepreneurial story, who tells students to be careful who you consider your friends and never, ever, let someone screw you over more than once. Here are some key takeaways from Cassidy's interview with the Miami Herald that every business owner, in the hospitality industry or not, can learn from.

To summarize Cassidy's entrepreneurial story:
Decades ago, Cassidy found himself tasting 'the best champagne', a Billecart-Salmon, at a French restaurant in New York and instantly knew he had to add it to his wine list the moment he got back to Miami. Upon writing to the supplier, Robert Chadderdon, who was based out of New York; and not hearing back, he decided to call him directly only to get a woman who completely dismissed him.

Fast forward a couple of years later, Cassidy found himself in a similar situation, tasting another incredible wine that so happened to be under the same supplier. Upon acquiring once more, he received the same woman who would just not give him the light of day.

A day after the phone incident, Cassidy had closed a wine deal with a fellow wine importer. When the seller asked if there was anything else he can help him with, Cassidy explained his unfortunate situation with the two wines he was unable to obtain. It turned out the seller knew Chadderdon and set him up with a meeting three weeks later.

There are several lessons to be learned here. Number one, gatekeepers don't always know best, so unless you hear a no from the horse's mouth directly, it shouldn't stop you from trying to inquire through other means, within reason, of course. They're trying to work in the best interest of their employer, but it can sometimes be hard to 'really see' what their employer really wants.

The seller asking, 'anything else I can help you with?' opened a conversation to further help their business relationship. More opportunities will appear in front of you if you're willing to ask this simple question to others. You build strong business relationships by helping your associates the best you can.

By Cassidy explaining a problem to a fellow business associate, his problem ended up getting solved. Do not be afraid to explain problems you're having within the business, other people often have the solution or, in this case, they know people who have the solution to your problem. By explaining a problem to your fellow business friends, all of a sudden you have access to their network of people who may be able to help you.


Posted by Liquor License Locators FL at 9:00 AM No comments:

Last post we touched on the common types of liquor licenses sold in Florida, but what happens if you're not interested in opening a restaurant, convince store, or night club, yet still want to sell alcohol? Are you still a little fuzzy on what applies to you and what doesn't apply to you? Do you even need a liquor license for your particular situation? Hopefully this article will help you find out what you need or set you off in the right direction to do further research.

For the most part obtaining a liquor license is pretty straightforward, but just knowing which one is best for your particular situation can take a little time to research, figure out, and decide. As mentioned in the previous post, there are roughly 36 permits and liquor licenses business owners can choose from, so it can definitely feel overwhelming knowing that you have almost 'too many' options available.

The Division of Alcoholic Beverages and Tobacco (ABT) is the branch responsible for overseeing licensure for all liquor in Florida state. They are in charge of enforcing the law and regulation of both the alcohol beverage and tobacco industry. This means they are in charge of licenses, collections, fees, and can even audit your taxes if they suspect something is not in compliance with the law.

So if you have a problem with your license or happen to get the wrong one for your unique situation, you'd be the first one to know about it from the ABT branch. Before you do heavy paperwork and pay for anything, make sure you confirm with them that your license is correct for the kind of business you want to do. Save yourself the trouble by asking the questions now!

If you're a professional caterer looking to obtain a license to serve alcohol at a venue, then you're business must meet certain requirements before you can do that. Similar to restaurants looking to acquire a liquor license, 51% of the caterer's income must be from the sale of non-alcohol items. This means the primary focus of your business should be food and soft drinks. Also, all alcohol you plan to serve must be bought from a licensed vendor, so make sure you have done a little bit of due diligence before you start the process.

There are licenses specifically for theme parks, golf courses, special events, music festivals, local municipal properties, and more. The good news is, obtaining a license for these special kinds of situations may actually be less complicated than obtaining a more common license for a bar or club. If you're not 100% which one you qualify under, then please check out the ABT website and look through the necessary requirements that apply for your particular situation.

We are a liquor license brokerage company, so if you have any questions in regards to how you can obtain a quota-based license, we'd be more than happy to help make the connection with another business owner looking to sell their current license.

Posted by Liquor License Locators FL at 9:00 AM No comments:

Congrats to The Island Cow restaurant in Sanibel on the purchase of their FULL liquor license! 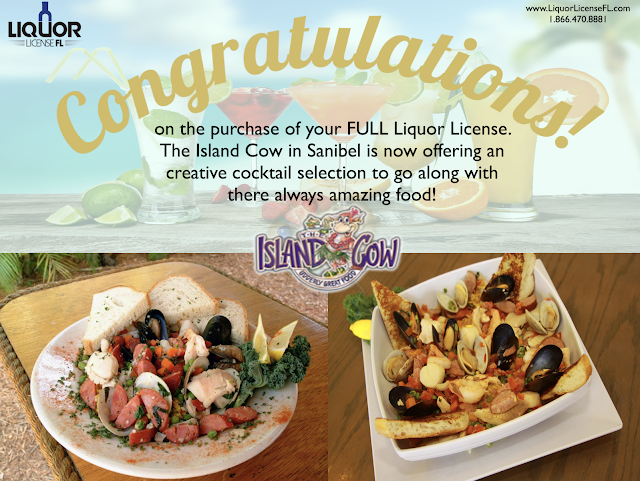 In the Mooo-d for Udderly Great Food?

Winner of the Best of the Islands Award for 11 years and counting!
What’s better than great food? More of it! At the Island Cow you will find the largest menu on the Island! Our menu is the result of years of culinary travel, two parts Southwest Florida, one part Southern Comfort food, we throw in a cup of Sanibel add a dash of the caribbean and the result is ALL delicious!
Voted a “Top 5 Breakfast in Florida!” by Southern Living Magazine

The Different Types of Liquor Licenses Available in Florida State


If you're the new owner of a bar, entertainment venue, or restaurant in the state of Florida, well first of all, congratulations! Second, you probably have plans to get a license to sell alcoholic drinks at your venue. There are different types of licenses you can get for your establishment in Florida, especially if you're planning on selling strong liquor and spirits or beer and wine. This article hopes to shed light on the different types of licenses you can acquire and to help you hone down on what license is best for you based for your particular situation.

For the most part though, the other licenses available are used in special cases for a wide variety of unique scenarios when different types of establishments are involved, like a bar versus a night club. As you can imagine, licenses to sell packaged drinks and drinks for venue consumption for liquor or spirit drinks are often a lot harder to get because it is more regulated. So as a new business owner, be prepared to exercise your patience when it comes to trying to obtain that particular license.

The three most common liquor licenses sold in Florida are as follows:

2 APS.
This license permits the sell of beer and wine for off-site consumption only. Grocery or convenience stores are the ones who often apply for this type of license. Unlike the other drinking on-site licenses, this particular one does not have a quota system, so it is easily obtainable. By having this license though, it does not allow you to sell liquor. It is for beer and wine only.

SRX License
Restaurants who would like to sell liquor at their establishment will need to purchase a special license for this and that's only if they meet certain requirements. The restaurant must first generate at least 51% of their income from food, soft drinks, and other non-alcohol related items before they're able to serve liquor.

Quota Licenses
This license applies mostly to bars or nightclubs looking to sell both liquor, beer, and wine. You are able to obtain licenses for both the sale of packaged alcohol to be consumed off-site and the sale of liquor to be consumed on the property itself. Unfortunately since these licenses are quota-based, it becomes very hard to get a brand new license right off the bat.

These quotas are set based on population of the county. So, one license becomes available for every additional 7,500 people living in that country. In order for owners to (hopefully) get this new license when it becomes available, they must enter into a lottery system and hope for the best. There are also brokers like us who help connect both buyers/sellers to one another so that new owners can obtain a existing license already in circulation.

Posted by Liquor License Locators FL at 9:00 AM 1 comment: