Edge district must be hotspot entertainment zone for St. Pete

For St. Petersburg restaurateur Stephen Schrutt, a bar should be, above all else, an escape.
That's why his newest creation, No Vacancy, feels like a midcentury Florida motel, with vintage patio furniture, massive flamingo and conch shell punch bowls and neon signs.
"I go out to the beach — that's my escape," Schrutt, owner and founder of Hunger + Thirst Group. "And hitting some of these beach bars, I thought, I don't want to do a beach bar, but there's a lot of elements of the Florida vibe that are just so cool."
Schrutt opened the bar quietly on Jan. 17, following a family and friends event; it's open to the public now, and a grand opening celebration is planned for Feb. 8.
It opens at 4 p.m. Monday through Friday and at 11 a.m. Saturdays and Sundays. Sunday brunch will likely debut in March, Schrutt said.
No Vacancy replaces Kings Street Food Counter, a comfort food restaurant that Schrutt decided to close in August. Kings Street, which became known for its over-the-top milkshakes, wasn't growing from a revenue perspective after three years in business. It is the latest concept for Schrutt's restaurant group, which is also the parent company of the Avenue and Park & Rec, an "eatertainment" concept that is expanding to downtown Tampa. (That opening, Schrutt said, is about two months away.)
The Kings Street location, smack dab in the middle of the city's Edge district, wasn't the problem, Schrutt knew. He also knew that whatever came next would need a full liquor license to succeed. So he closed down Kings Street, and after mulling it over, decided it would be perfect for No Vacancy, an idea he's had for some time.After a renovation that Schrutt says was "more than six figures," the space is No Vacancy, a space that's made for selfies and Instagram-worthy shots with the squad. The menu mirrors the theme — it's laid back, featuring items like a fried fish sandwich, a Cuban sandwich and lobster cheese dip. There are frozen cocktails, punch bowls meant to be shared and Florida beers on draft. The ladies room is decked out in flamingo wallpaper and framed vintage Playboy covers.
"It's Florida," Schrutt said of the concept. "You understand when it's from here and you think it's neat when you're not because it's a little bit of quirky Florida but not overdone. We wanted it to still be tasteful and a little bit cheeky and fun but come off as an escape."Click for full article

Posted by Liquor License Locators FL at 3:02 PM No comments:

Have you been collecting the correct amount of sales tax?

As of January 1st 2019, Surtax rates have changed in 12 counties though-out the State of Florida. Please check the new rates below to ensure that you are collecting the correct amount of tax.

Liquor License FL is here for all of your licensing needs. 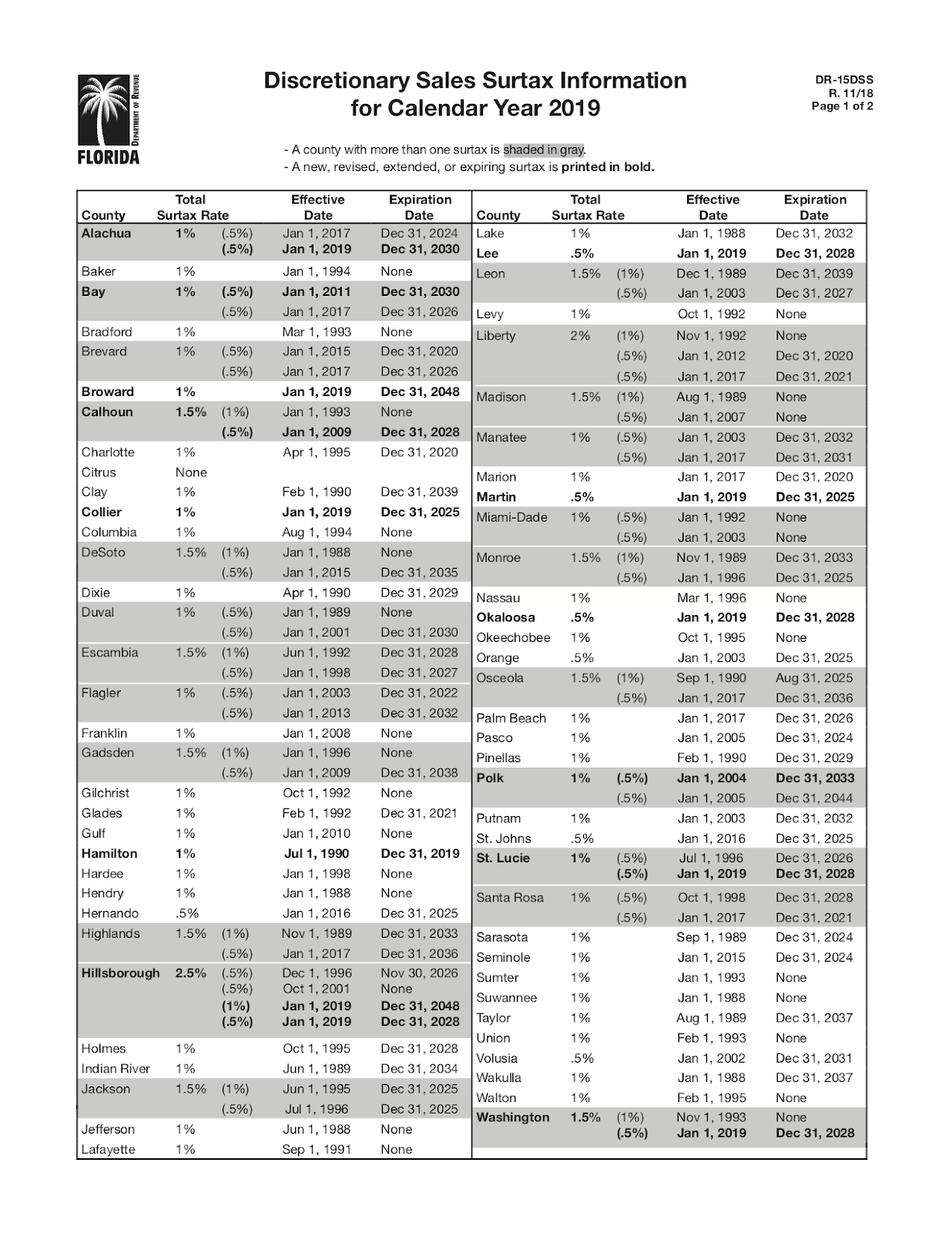 Posted by Liquor License Locators FL at 11:37 AM No comments:

No ID? No problem!

Forgetting your driver's license at home while driving might no longer be an issue for Florida drivers if a proposed bill passes this legislative session.
Florida could be one of the first 14 states to accept electronic identification, according to a South Florida Sun-Sentinel report.
Tampa Rep. James Grant is expected to sponsor a bill that would allow drivers to use electronic credentials, as opposed to hard copies, for ID and registration during traffic stops, as well as for voting and purchasing liquor, according to the Sentinel.
Florida drivers can already present proof of insurance electronically.
Grant co-sponsored a similar bill last year. it died in the Senate during its second reading due to concerns of potential hacking on mobile devices.
The Sun Sentinel reports the American Association of Motor Vehicle Administrators is developing standard protocols to enable to use of digital licenses.​https://www.clickorlando.com/news/proposed-bill-would-allow-florida-residents-to-use-electronic-id-registration

Clink link for article:
https://www.clickorlando.com/news/proposed-bill-would-allow-florida-residents-to-use-electronic-id-registration
Posted by Liquor License Locators FL at 10:50 AM No comments:

Tom Henderson was known around Gainesville as “Trader Tom,” a no-nonsense bar owner who went from serving beer and sandwiches to students to hosting high-profile celebrities.
He once told a then-unknown, up-and-coming Gainesville musician named Tom Petty to “turn the music down” at his adult establishment.
Henderson, who died at his home in Satellite Beach on Saturday at 89, owned several well-known bars in the Gainesville area, including Trader’s North, Trader’s South and the Round Bar.
“He was a very good man, very direct in his business,” his youngest son, Joey Henderson, said Wednesday. “He always had a plan, what he wanted to do. It was kind of his way or no way.
“When he went to work and from work, he carried a sawed-off double-barrel shotgun openly, to protect his money bags. That was his character.”
Born in Pensacola, Henderson enrolled at the University of Florida to attend law school in the early 1950s, but soured on the law and instead finished with a degree in psychology. His first bar in Gainesville, Tom Suds, was close to campus and sold beer and sandwiches.
After a short stint owning a bar called The Blue Flame, Henderson opened The Stag Bar on Northwest Fifth Avenue in 1956. His white friends from the UF law school wanted to stop by, but because Gainesville neighborhoods were segregated at the time, they couldn’t because the bar was open only to African-American patrons.
Henderson then opened Trader’s North on Northwest 13th Street in the 1960s, a bar known for its large rope net on the ceiling that covered the whole building. He would trade beer for interesting artifacts to hang on the giant net, hence earning the nickname Trader Tom. Beer was otherwise 25 cents a glass and Henderson had go-go girls dance on a small stage.
“The bar business was in his blood,” Joey Henderson said. “It was always, ‘build a different bar.’ He was a go-getter.”
In 1968, Henderson opened Trader’s South on Southwest 13th Street, a bar that featured live bands playing while topless girls danced on table tops. When the state of Florida refused to grant Henderson a liquor license because of the topless dancers, Henderson sued and won the right to serve liquor.
Petty and Marty Jourard of The Motels were among musicians who played at the adult establishment in the 1960s and 1970s.
“The bands, my dad was harsh on them,” Joey Henderson said. “He didn’t care who they were.”
Robin Williams visited Trader’s South after performing at Gator Growl in 1982, and Joey Henderson said his dad was struck by how short he was. Former NFL defensive lineman and actor Alex Karras also stopped by his establishments over the years.
In 1977, Henderson opened the Green Dolphin, on Northwest 13th Street next to Trader’s North, which served beer and sandwiches. The last bar that Henderson opened in Gainesville was Round Bar on Northwest 39th Avenue and 13th Street, a circular building that featured a spiral staircase leading up to bar seating. Joey Henderson said his dad got the idea for the unique design after visiting the Conch House in St. Augustine.
’He probably should have been an architect and a builder,” Joey Henderson said.
Henderson left Gainesville in 1989, retiring to Satellite Beach. Joey Henderson ran Trader’s South until it closed in 2006, after the expiration of an agreement between the club’s owners and the city that exempted it from rules prohibiting clubs from serving alcohol if they featured nude dancing.
The legal challenges began in 1995, when Gainesville passed laws to prevent nude establishments from serving alcohol. Henderson sued the city in 1996 and Trader’s South and the city reached an agreement in 1998 for a 10-year waiver, retroactive to 1996. In exchange for dropping its suit and donating $500 a year to the Gainesville symphony orchestra, Trader’s South could keep serving alcohol as a nude establishment.
Joey Henderson recalled his last meeting with then-Gainesville Mayor Pegeen Hanrahan in 2006, pleading for another extension.
“She was able to support us the first time around but told us she could not support us again,” Joey Henderson said. “I just decided then to stop fighting it.”
In retirement, Joey Henderson said his father enjoyed duck hunting, fishing off the dock of his Satellite Beach home and trips to Costa Rica.
Tom Henderson is survived by his three children, a daughter Maria, son Nick and youngest son Joey, and six grandchildren. Services were held in Satellite Beach.

Posted by Liquor License Locators FL at 12:06 PM No comments:

R.I.P to a Local Legend

By CHRIS MORRIS
The prolonged government shutdown is already dramatically impacting the lives of federal workers and is leaving investors in the dark due to the lack of economic updates. But some impacts are less obvious. Among those: Until the government reopens, there won’t be any new beer or wine releases.
Breweries and wineries require federal approval for their products’ labels. That department is closed these days, though, meaning brewers and vintners who want to roll out something new can’t.
Technically, that won’t be an immediate problem. Labels are typically approved well in advance of a product’s release, so consumers won’t see a dramatic impact anytime soon, but the shutdown is creating a backlog. Additionally, craft brewing startups, which require license approval, are also in limbo.
(The shutdown will have no impact on beers and wines whose labels have already been approved.)
The Alcohol and Tobacco Tax and Trade Bureau is the agency in charge of approving labels, licenses, and new ingredients to beer, wine, and spirits. During the shutdown, companies can continue to submit applications, but the site notes “submissions will not be reviewed or approved until appropriations are enacted.”
The government has now been shut down for 12 days as Democrats and Donald Trump face off over funding for the border wall. Trump is demanding $5 billionin funding. Democrats have held tight to $1.6 billion previously negotiated with Republicans in Congress.
Posted by Liquor License Locators FL at 10:22 AM No comments: